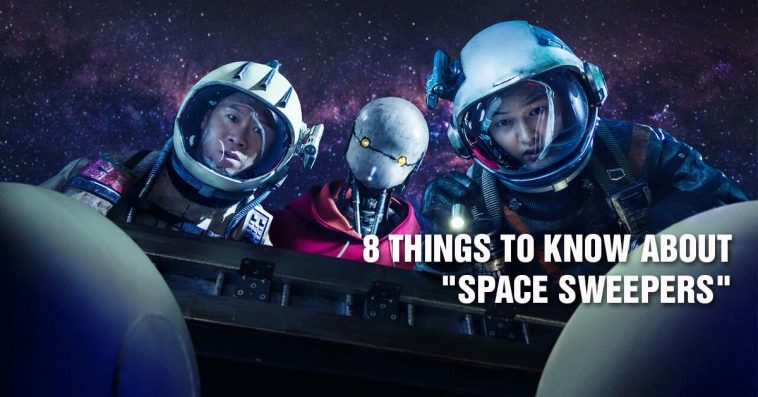 Netflix is on a roll—after its massively successful TV shows such as Lupin, The Queen’s Gambit and Bridgerton, the streaming giant proves that it’s also home to blockbuster movies. Entering the scene is Space Sweepers, the latest Korean movie that dropped on Netflix on February 5 has already topped the charts in various regions around the world, even just a few days after its release.

The science-fiction blockbuster is set in 2092 when Earth has become almost uninhabitable. UTS, a large corporation decides to build a new home on Mars but only for a selected few. The story follows Tae-ho (Song Joong-ki) and Captain Jang (Kim Tae-ri), who are part of a crew of The Victory, a space junk collector ship. Seemingly just tasked with collecting space junk and making ends meet, the crew’s lives when they discover a child robot named Dorothy, who despite her appearance, is actually a highly dangerous weapon.

But whether you’ve seen the movie or not, there’s bound to be some details about it that have you curious. Here are five things you should know about the latest Netflix hit.

Space Sweepers is the first Korean sci-fi blockbuster, and that’s why director Jo Sung Hee had to really study his way to creating the film. According to him, he wanted to make sure that although the film happens in space, the audience can still watch characters that seem like “ordinary Koreans who are just like them,” instead of cartoon characters or superhuman beings.

As to what it was like to star in the first Korean space blockbuster, Song Joong Ki said that instead of feeling burdened, he was actually excited to star in Space Sweepers. Jin Sun Kyu, on the other hand, said that starring in the film felt like he was “like an athlete” playing for the nation and that he was “extremely proud” of what they produced.

2. The concept of the film was born over 10 years ago.

Director Jo Sung Hee shared that the story of Space Sweepers came to him first back in 2008 or 2009. It was all thanks to his friend, who told him stories “about space and space sweepers” which he eventually developed over the course of ten years.

“The story really began with two ideas: space debris and space workers who clean up the debris,” he said in the press notes.

3. The release has been delayed due to Covid-19

Like many other movies whose production and release have been delayed to Covid-19, Space Sweepers isn’t an exception. The filming started in 2019 and was slated for a 2020 release until the pandemic hit. Plans were made to release it during South Korea’s chuseok holiday (or autumn eve) but were once again postponed due to the rise of the Covid-19 cases in the country. Eventually, it was decided that the film will be released exclusively on Netflix.

Space Sweepers stars The Handmaiden‘s Kim Tae-ri and Descendents of the Sun‘s Song Joong-ki—two household names in South Korea. As early as June 2018, it was reported that Song already agreed to star in director Jo Sung-hee’s next film after the success of A Werewolf Boy even before he read the script. On the other hand, Kim was offered her role in January 2019 and was instantly sold by the movie’s premise.

Song’s last movie was in 2017 for The Battleship Island while Kim’s was Little Forest in 2018—making this sort of their comeback to the big screen. Other than these two star-power leads, Space Sweepers also stars The Outlaw’s Jin Seon-kyu and top character actor, Yoo Hae-jin. English actor, Richard Armitage is also part of the cast, making it is his first Korean film.

5. Song Joong Ki joined the project without reading the script

Yup, he went into the project only knowing only that Director Jo will be helming a space sci-fi movie! Song Joong Ki said that he first heard of this project when he was still working with the director on A Werewolf Boy. Back then, the storyline “was a little bit different from what it came out to be,” but he was already interested in the concept because it felt “so new and fresh” to him. Ten years later, they offered the role to him, to which he immediately accepted.

During the roundtable interview, Song Joong Ki further explained that he was initially attracted more to the film rather than his character. What eventually drew him to Tae Ho’s character, however, is his humanism and “his perspective on the human race and on others.”

6. One of the challenges the cast had during the shoot was imagining all the space action

Because everything in the film happens in space, the cast had to rely mostly on their imagination during the shoot, which is the most challenging bit of the shoot. “[The film] required a great deal of imagination from all of us, and once you lose touch with that imagination, it’s easy to forget what you’re doing,” Kim Tae Ri explained.

Aside from image training, Jin Sun Kyu and Kim Tae Ri both said they would constantly ask the director questions about the scene and his vision for the film.

7. Space Sweepers is more than just a sci-fi film

Aside from all the space action, what makes Space Sweepers different from other films is how it’s so much more than a sci-fi film. Throughout the film, the audience gets a glimpse not only of the stark difference between the rich and the poor but also of the environmental issues that can affect humans greatly in the future.

For Yoo Hai Jin, one message that he wishes the audience can take away from the film is about how precious the Earth is. “We have a lot of environmental issues, and due to COVID-19, it has led to a hike in the use of plastic as well,” he explained. “We really have to come together and put in our utmost efforts to protect the earth.”

8. Space Sweepers was supposed to premiere in cinemas last year

Space Sweepers was originally set for premiere in June last year. However, because of the pandemic, the film’s release date has been pushed back until its Netflix film was decided. To Song Joong Ki, reaching out to the audience and how you communicate with them is the most important thing for him.

And while the actors are admittedly sad that the film won’t have a big screen premiere, Kim Tae Ri is still happy that they’re able to meet the audience through the streaming site.

Meanwhile, Director Jo said that he was only nervous and excited to see the final outcome of the film. “We are going to meet the audience of 190 countries, and I just want all of the people across the world to understand that there’s a large variety of movies being produced in Korea,” he added.