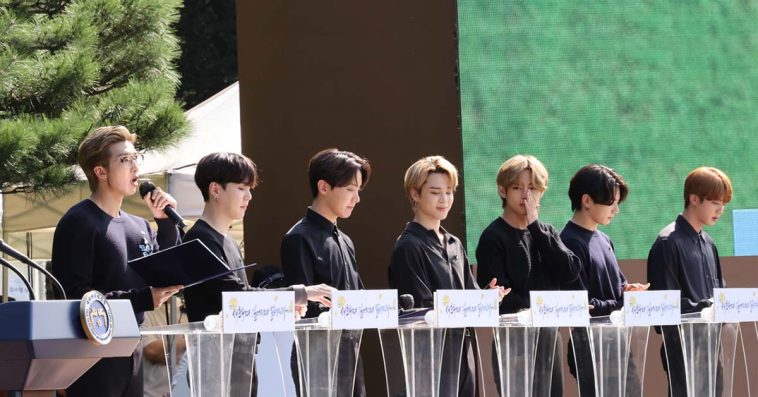 TFW! you realize that Struggle is Real, there will still be someone that will help you light up your hope amid tough times.

On Saturday, Sept 19, The worldwide K-pop supergroup BTS, delivered a powerful motivational speech at South Korea’s inaugural Youth Day ceremony, about lifting each other when times get tough. The speech delivered by each of all the group’s seven members in turn, at the presidential office Cheong Wa Dae.

While they have become the first South Korean recording artists to reach No. 1 on Billboard’s main Hot 100 singles chart last month with “Dynamite”. The group shared their inner struggles along the way in reaching their music dream.

“Around 2018, I remember when all seven of us felt lost after receiving undeservedly overwhelming success. Even if our path is always filled with flowers and fruits, we never believe that the path will always be like that”. BTS leader RM said, explaining the band’s career has been a roller coaster throughout the years.

He also added, “It’s because we never know when things will go downhill again, and when the next rainstorm will strike again”.

The supergroup leader RM also stressed how BTS members relied on one another during times of uncertainties and depression.

“At the end of such uncertainty and depression, the seven of us once again began to fill each other with dreams and trust, just like we were boys back then”.

“Then in August 2020, the Billboard No. 1 and another No. 1, these gifts were given when we just picked ourselves back up, all seven of us were thankful with tears”.

RM paid tribute to bandmates and armies who are always there to pick them up: “I am even more thankful to our members and fans who have held each other tightly and relied on each other for the past then years in the moment of giving up and falling behind”.

Members also shared some emotions they experienced during the start of their careers, highlighting how, despite the group enjoying global stardom, the band came from a rather scrappy and humble beginning.

Meanwhile, BTS presented President Moon Jae-in with a purple-colored box as a “Year 2039 Gift” that will be stored at the National Museum of Korean Contemporary History in Seoul, like a time capsule. The box will be opened at the 20th Youth Day event in 2039.

The government of South Korea designated the third Saturday in September of each year as Youth Day under the Framework Act on Young Adults enacted last month.