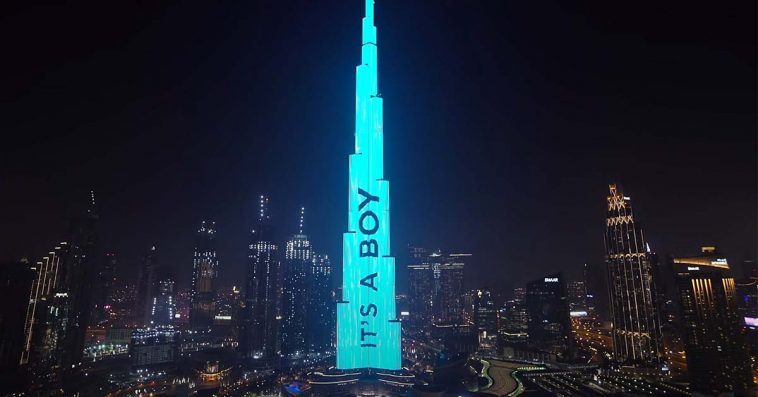 Gender reveals have been getting out of hand lately. One involving fireworks in LA sparked a massive wildfire at the weekend that is still blazing through the San Bernardino National Forest in California.

But none of that has stopped the famous YouTubers in their quest to deliver the biggest gender reveal party that no one has ever seen before.

Anasala Family is a YouTube channel with over 7.8 million followers that features husband and wife Anas Marwah and Asala Maleh, (a Syrian-Canadian couple) as well as daughter Mila Marwah. The family recently posted a picture on Instagram with a banner on their back holding by scuba divers at Dubai Aquarium & Underwater Zoo in Dubai Mall saying “Coming soon on Anasala”. #BiggestBabyRevealEver

On Sept 8, Tuesday, Anasala Family finally posted a video of the event that projected their upcoming child’s gender on to Dubai’s Burj Khalifa, the tallest building in the world, the video went viral and stunning all worldwide with over 16 million views.

In the clip, the couple along with their daughter seem excited beyond measure as the 163-story tower lit up in blue and pink illustrations in the build-up to the big moment.

Then, the building lit up into stars along with a countdown from 10 after flashing a silhouette of the couple. On reaching zero, the lines wiggled all the way up to the peak of the structure’s spire, then glowed blue to reveal the baby’s gender. The tower finally projected the words, “It’s a boy!”

After the video has gone viral, netizens speculated that the couple had paid an extravagant amount around $100,000 USD for the event. While it’s not yet known whether its true or it came their way as one of the PR packages, the gender reveal party is surely a night to remember as one of the “BIGGEST BABY REVEAL EVER”.

In the YouTube video, Anasala says (per English translation subtitles) “we wanted to deliver content that no one has seen before”.

The couple has also extended gratitude to their followers and supporters saying, “Without you, none of this would have been made possible.”