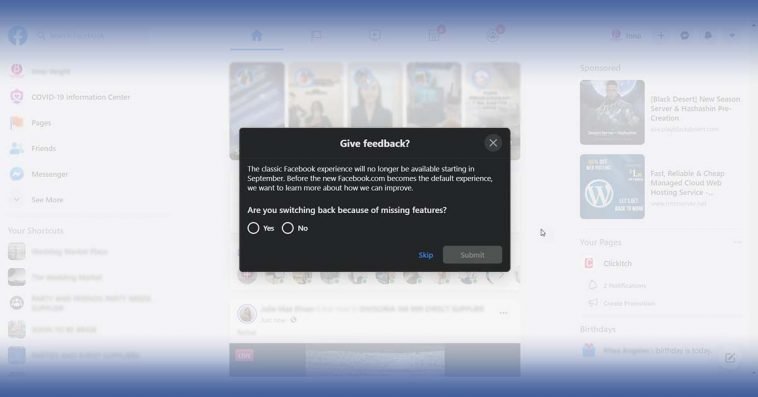 It’s breaking the internet from the buzz, so is it really Bye, Felicia! to our Classic Facebook website interface?

Yas! Facebook’s “classic” experience, the interface with the iconic blue navigation bar at the top, is canceled for good this September. The Facebook support page has been updated saying everyone will soon have the new design. Although you can temporarily switch back to the old interface on Facebook’s site, the button warns that “the classic Facebook will no longer be available starting this September.”

The announcement was made last year at 2019 Facebook’s F8 developer conference, unveiled FB5, a new design for the Facebook website, which would no longer have the classic signature blue navigation bar, giving way to a cleaner and more minimalist style with white color.

They had been testing the new design with a more app-like approach for quite a long time, and was initially available only to a small group of people, in the beginning, rolled out on the service’s iOS and Android apps.

In March it got a widespread release on desktop as an opt-in feature, leaving people free to continue using the old design if they want to, which Netizens are switching back to the Classic Mode. This September, however, the option will not be available, and the Classic design will be gone forever.

The new website’s interface has a big change from what Facebook has used to be. It’s a lot cleaner, includes a lot more white space, and there’s also a switch for dark mode for people who want to. Functionally, it also places a bigger focus on the service’s Groups features, as well as prominently displaying links to Facebook’s Watch, Marketplace, and Gaming sections in its top navigation bar.

It’s a much-needed clap back compared to the cluttered look of the old one, but let’s see if this will bring back Facebook users who’ve abandoned the service in recent years.