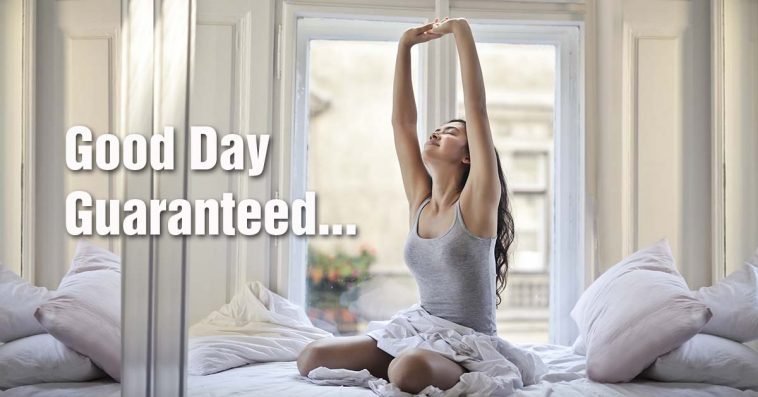 Feel like you’re always chasing your tail? Turns out there is an optimum time for every task. Meet the clever way to clock on.

Getting a seat on the bus, but not the one beside the man with his fly undone eating
a Big Mac. Ordering a free drink at Starbucks, thanks to your hard work getting your 12 beverage stars. Thought a good day at work was all about the external? Wrong. There is a way to take back control—simply by scheduling your day according to science so you can work out the best way to do… well, everything. Read on; your new
timetable awaits.

Let Chris Martin wake you up (not in that way). Music has been shown to shake off that sleepy head- fuzz. Music psychologist David M. Greenberg found “Viva La Vida” is the perfect wake-up tune because it has three crucial elements for stirring brains: a slow build, positive lyrics, and a strong tempo of 100 to 130 bpm. See also Clean Bandit’s “Rather Be” if the idea of Coldplay makes your brain hurt.

You know your really zenned-out yogi friend? She’s onto something other than the ability to scratch her nose with her toe. A study by the Indian Journal of Psychiatry tested cortisol (aka the stress hormone) levels in 58 patients and found they were significantly lowered in those who practiced yoga daily. The best move? Child s pose. “Having your head on the ground brings pressure to the vagus nerves which, when stimulated, helps trigger the ‘rest and digest’ part of our nervous system, which lowers cortisol,” says yoga teacher Lucy McCarthy. Bring on the chill.

This should be the first thing you do when you arrive a work. One study, which looked at 35 years’ worth of task-setting research, found we perform 15% better once we’ve made concrete goals that focus us. Give tasks a ‘you’ slant (such as “If I get all this done today, I can go for dinner this evening”). It’s known as intrinsic motivation and is a firmer kick up the bum than doing things because someone told us to.

Good news: a morning break will make you more productive in the afternoon. Professors at Baylor University surveyed 959 workers’ break times and found that those who took theirs in the morning had more energy and concentration than those who took them in the afternoon. Even better news? Snack on dark chocolate—studies show it boosts everything from memory to endorphins. God, we love science.

The optimum time for a break is 17 minutes. A recent study by the University of Toronto found that the most productive employees work consecutively for 52 minutes before taking 17 minutes off as a break away from their screens.

Never finish your to-do list? Your phone could be to blame. The average iPhone user unlocks theirs 80 times a day—rising to 130 for heavier users. Experts think it’s more efficient to set a time for phone checking, instead of reacting to each notification. To make the most out of it (read: get more Likes), try a lunchtime “social slot.” Hootsuite,
a platform for managing multiple social media accounts, and Hubspot, a marketing firm, agree that 12 pm to 3 pm is the peak time for Twitter interaction, and 12 pm to 1 pm for Instagram.

Big PM meeting? Don’t spend your lunch hour cramming—hit the gym. Bristol University found that those who exercised during work had better concentration, while John Ratey, author of Spark: The Revolutionary New Science of Exercise and the Brain, says that the increased blood flow causes a near-instant brain boost. “Twenty minutes of exercise just before taking a test of giving a speech can improve performance,” he says. Just, er, remember to shower.

Caffeine takes 20 minutes to kick in, so time it strategically. “If you have a meeting you need to be sharp for, or a piece of work that requires focus, use it as a performance
enhancer,” says Nick Littlehales, a sleep and productivity expert. The best mug of Joe? A mocha. A new study by Clarkson University found that the combination of coffee and chocolate is perfect for helping you stay focused. It said nothing about whipped cream.

Embrace your inner entrepreneur by exploring ideas when you’re tired. Researchers split participants into two groups and gave them two types of creativity test: one
measured insight (the type of problem requiring a leap into the unknown) and the other analytical ability (where you have to work steadily towards the answer) at different times. Those who were unfocused were much better at the insight tasks, and linking random ideas to solve them. Bet you the slanket was invented around 4pm…

6 PM Cut off your email

Noticed you get more curt replies to emails you fire off on your way home from work?
“You don’t want people’s hearts to sink when they get an email just as they’re switching off, because that will color their reply,” says economist Caroline Webb. That’s if you get a reply at all; a study of more than 500,000 emails found reply-rates are highest when emails are sent in the morning. Save it and send it first thing the next day.