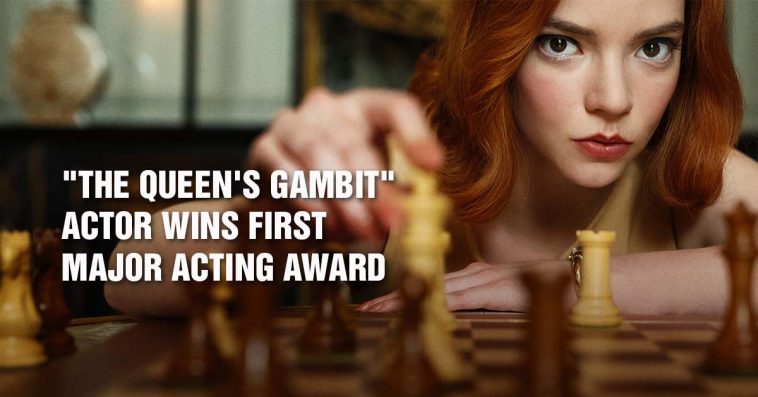 Anya Taylor-Joy is officially a top acting award winner thanks to the Netflix sensation “The Queen’s Gambit,” which earned the rising actress the Golden Globe for Best Actress in a Limited Series. Taylor-Joy is the first Latina to win in this category.

Taylor-Joy won the Globe over fellow nominees Cate Blanchett (“Mrs. America”), Daisy Edgar-Jones (“Normal People”), Shira Haas (“Unorthodox”), and Nicole Kidman (“The Undoing”). The performer was also up for a second Golden Globe at the 78th annual ceremony with her performance in the film “Emma,” for which she competed in the Best Actress in a Motion Picture Comedy or Musical category.

“Scott Frank, my god, I love you,” she said. “Thank you for letting me be part of the journey and thank you for trusting me with Beth.”

“It’s obviously wonderful that everyone has seen the show, but I would do this project again and again and again,” she went on. “I learned so much. I’m so grateful and thank you to the audiences that have watched it and supported the character. It meant the world.”

Taylor-Joy was a double nominee at this year’s Globes, winning for her portrayal of addict and chess prodigy Beth Harmon in Netflix’s “The Queen’s Gambit,” but she was also in the running on the film side of the ballot for “Emma.” (She lost the film award to Rosamund Pike from “I Care A Lot.”)

Prior to the 2021 Golden Globes, Taylor-Joy had a Gotham Award under her belt and a few critics prizes. The actress took home the Gotham Award for Breakthrough Actor at the 2016 ceremony for her performance in Robert Eggers’ “The Witch.” Despite facing tough competition from the likes of Nicole Kidman (who was in the running for her fifth Golden Globe), Taylor-Joy was widely viewed as the frontrunner given the rave reviews and blockbuster streaming numbers for “The Queen’s Gambit.” Netflix announced in late November the series was seen by 62 million households over its first 28 days of release, making it the streamer’s biggest launch ever for a limited series.

“At our core, we are very similar,” Taylor-Joy said about her and Beth Harmon. “And I think from the second I met [Beth], it was a weird pain. It was a pain of, ‘Oh God, this hurts so good. And it hurts so good because I know it’s true. And what you need to learn, I need to learn.'”

While Taylor-Joy won Best Actress in the Limited Series category, the door is remaining open for her to return as Beth Harmon in a potential second season of “The Queen’s Gambit.” As the actress told in an interview, “It’s so surreal and very wonderful that people want a second season. We never thought about it, there was no discussion about it. That said, never say ‘never’ in Hollywood. It would be very interesting to see how Beth would be as a mother, now that she’s sober and more cognizant of the demons that pull her down.”