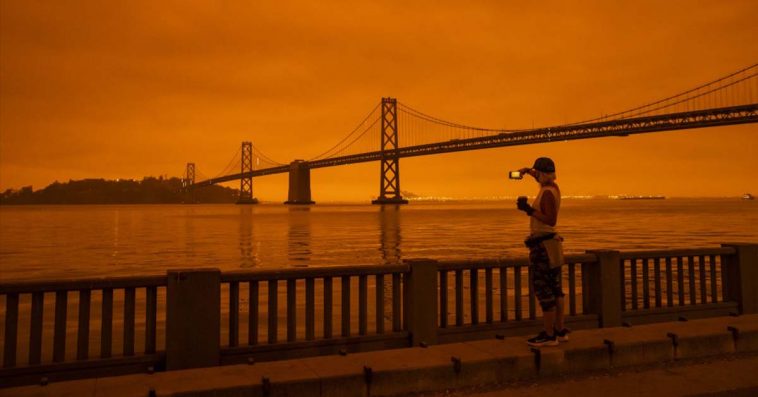 Shookt! What is happening to the world? are we on Mars? Damn 2020! San Francisco’s Golden Gate bridge skyline turns orange and gives you an apocalyptic creeps.

Most of the fires in California are caused by people, and this one was started by a pyrotechnic device used at a gender-reveal party, authorities said on Sunday, Sept 6.

The El Dorado Fire in Southern California was caused by a “smoke generating pyrotechnic device,” said the California Department of Forestry and Fire Prevention in a statement.

Firefighters battled the El Dorado Fire and other wildfires as the state sweltered under recording-breaking temperatures.

In San Francisco, the Golden Gate Bridge illuminated in orange as wildfire smoke envelops the city.

On Wednesday, Sept 9, San Francisco residents awoke to hazy skies in the morning, the city bathed in deep orange light and shrouded in smoke from the fires.

The sky took on the unusual hue because light was being filtered through the smoke, regional air district meteorologist Jarrett Claiborne said in a video shared on the Bay Area Air Quality’s Twitter page.

Local residents took some footage of the current situation in their areas, that looks like you are from a different planet, and posted it on socmed.

Local police forces advised drivers to keep their headlights on all day and the National Weather Service said conditions could worsen.

Those apocalyptic photos of San Francisco spread across social media in recent days are just one measure of the impact California’s 2020 fire season is having.