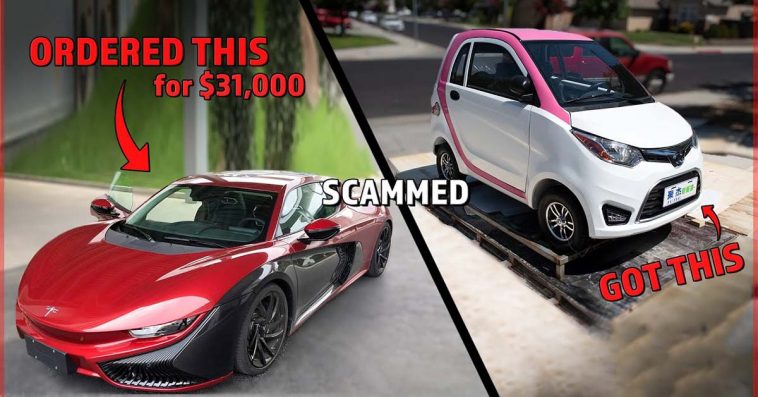 Shookt!!! a guy ordered a supercar online from China and he receives a different car? bruh? FR? cant even!.

As e-commerce continues to grow and expand brought by people who are obliged to stay at home amid the Covid-19 pandemic, into every aspect of our daily life. Online scammers are also growing in sophistication, people scamming other people into buying bogus products isn’t new. With the rise of e-commerce, it has become a lot easier to deceive buyers into sending them hefty cash payments for a product that’s completely different than advertised.

On Thursday, August 6, Nick Macneill a YouTube Vlogger posted a video on his YouTube channel: The Inja, his story about his online purchase of an electric supercar from the seller named Zhenjiang Zibon Electric Vehicles Co. Ltd on Alibaba (a leading Chinese wholesale marketplace for global trade). The merch was marketed as a Chinese-made electric supercar priced at just $31,000 that turns out to be a big scam.

The story goes pretty much like this. Guy searches for an electric car online, finds an allegedly Chinese-made electric supercar, he likes it, decides to buy it, and that’s where things start going sideways.

“complete scam company. They do not deserve to be doing business. I thought I was gonna see an electric supercar today”, Nick said in his YouTube video.

“I — I cannot… words can’t describe the anger and the frustration I feel right now. I am speechless”, Nick added from his dismayed expression.

In the YouTube video, the tricked customer tells his account of the story, how he contacted the seller and was given an actual catalogue of the car with extra pictures, which fooled him into thinking the deal would be legit. Furthermore, he did extra research on the company listed as the seller – Zhenjiang Zibon Electric Vehicles Co. Ltd (don’t try to pronounce it, though) – and found nothing suspicious. Alibaba even specified that “the supplier’s company premises has been checked by Alibaba.com staff to verify onsite operations exist there,” which prompted him to pay the $5,000 deposit.

Then it was all a downhill race as the delivery failed to reach him and after numerous emails with a presumed Zibon representative, they finally received a car. Which was not the car he ordered, but a completely different vehicle. The Zibon guy claims he refunded the buyer with more than he spent on the car and that the situation is hurting the business. Alibaba declined to comment.

The bottom line here is that purchasing cars online, unless it’s done from a trusted, reputable outlet such as Tesla, for example, is still a tricky business.