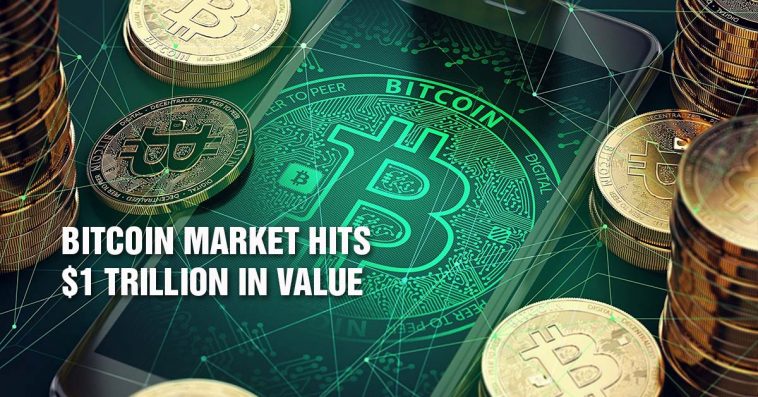 On Friday, Feb 19, The total value of all bitcoin topped $1.0 trillion, capping a spectacular record-breaking week for the world’s most popular cryptocurrency.

At about 1625 GMT, bitcoin zoomed to its latest all-time pinnacle at $54,182 after a string of corporate giants embraced the digital unit.

With more than 18.6 million bitcoins created since the digital currency was launched in 2009, the entire market is now worth $1.002 trillion, according to data provider Coinmarketcap.com.

“This is certainly big news for the industry and this would not have been possible without the involvement of smart money,” said AvaTrade analyst Naeem Aslam.

“The reason that one trillion dollar market cap is significant because not many believed that bitcoin can achieve this. Now, we have a real number which is massive in size and we are going to get more investors joining this rally,” he added.

Bitcoin has set a blistering record pace, blasting past $50,000 on Tuesday, a week after Tesla revealed it had invested $1.5 billion in the unit.

Investors and Wall Street finance giants have been wooed by dizzying growth, the opportunity for profit and asset diversification, and a safe store of value to guard against inflation.

“The payment integration and store of value are the factors which are driving the price higher and as long as this support remain in place, we are likely to have even bigger headlines,” added Aslam.

The virtual unit has been on a meteoric rise since March last year, when it stood at $5,000, spurred by online payments giant PayPal saying it would allow account holders to use cryptocurrency.

Once regarded as the preserve of internet geeks and hobbyists, bitcoin has now soared by almost 90 percent in value so far this year, despite mounting regulatory concerns and analyst fears of a speculative bubble.

On Friday, Elon Musk, the founder of electric carmaker Tesla, sought to defend his company’s investment — and contrasted bitcoin with some traditional fiat currencies.

“When fiat currency has a negative real interest, only a fool wouldn’t look elsewhere,” he tweeted in reference to his company’s move into bitcoin.

“The bitcoin rally continues but what is different this time when compared with late 2017, the upward moves are less than the aggressive, mad moves (that) were seen then,” Madden told AFP.

“The fact we are seeing more measured moves could be a sign the market is maturing, which should help it attract more well-known names, like MasterCard and Bank of New York Mellon, to back the cryptocurrency.”—Agence France-Presse