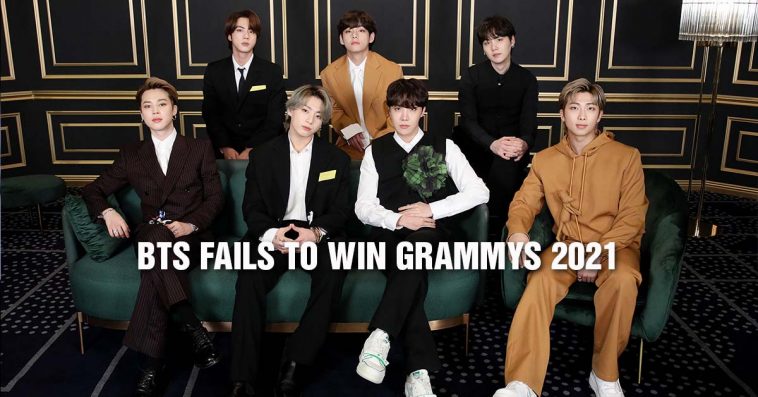 One of the biggest K-pop groups in the world, BTS had scored their very first Grammys nomination in the Best Pop Duo/Group Performance at the 63rd edition of the prestigious award ceremony and despite breaking almost all the records on the charts in 2020 they, unfortunately, lost out to Ariana Grande and Lady Gaga in the category.

But the BTS Army — the fans of the South Korean megastars — had high hopes the group would win its first Grammy, which would have been the first Grammy ever for a K-pop act.

The seven-member group had hoped to pull off a victory for pop duo/group performance for the No. 1 single “Dynamite.” The upbeat track, which topped the Hot 100, epitomized last year’s disco revival. It also marked BTS’ first single performed entirely in English.

Gaga and Grande’s “Rain on Me,” another disco-driven smash with formidable star power, took home the top prize instead.

BTS fans are upset after the group did not win for best pop duo/group performance at the 2021 Grammys — but they still made history with a “Dynamite” performance.

The win would have marked a major achievement for K-pop at the music industry’s defining awards show (though many fans wondered why they weren’t nominated for more high-profile awards at the Grammys this year).

“Dynamite” was the rejuvenating closer on the 2020 LP “Be,” which grappled with the effects of the coronavirus and the isolation that many fans felt while stuck at home.

The group was previously — if obliquely — in the Grammy nomination mix in 2018, when its LP “Love Yourself: Tear” won a nomination for recording package, though the nomination technically went to the design firm HuskyFox.

BTS performed at the Grammys in 2020 as part of Lil Nas X’s medley for “Old Town Road” where the group’s edit — “Seoul Town Road” — was a highlight of the telecast. They’ll perform in Sunday’s main telecast as well.

Soon after the iconic performance of BTS, ARMY started trending hashtags on Twitter like #BTSOurGreatestPrize and #LightItUpBTS. One fan wrote, “We have you, and you have us. We have everything we need right here. #LightltUpBTS #BTSOurGreatestPrize #SetTheNightAlightBTS”, while another fan wrote, “We are always gonna stay by your side and you did a great job as always. We are so proud of you and you are already a winner for us WE LOVE YOU BTS #BTSOurGreatestPrize #SetTheNightAlightBTS #LightItUpBTS.” Check out how the fans cheered for BTS after they failed to grab a Grammy trophy for Dynamite.