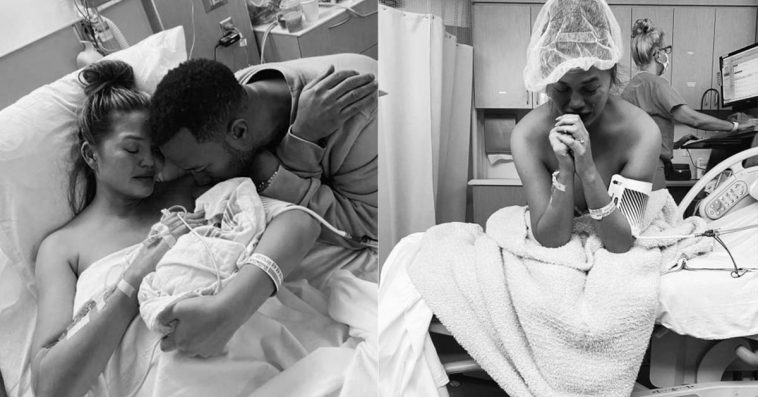 Shookt! this is so unexpected and saddening. Miscarriage is so hard, painful, and heartbreaking. Damn, 2020! you better stop now.

The model and cookbook author Chrissy Teigen said that she and her husband, the singer John Legend, had lost their third child, a boy, days after she revealed on social media about suffering pregnancy complications.

On Wednesday, Oct 1, Chrissy revealed their pregnancy loss on her social media accounts; Instagram and Twitter, alongside she posted a black-and-white photograph that showed her sitting on a hospital bed with her hands clasped in a prayer-like position, seemingly in tears. Another Instagram photo shows her holding her baby as Mr. Legend kisses her shoulder.

“We are shocked and in the kind of deep pain you only hear about, the kind of pain we’ve never felt before”, she said.

“We were never able to stop the bleeding and give our baby the fluids he needed, despite bags and bags of blood transfusions”, the model and author added. “It just wasn’t enough”.

Chrissy said they had not officially decided on a name, but had already started calling the child “Jack”.

“Jack worked so hard to be a part of our little family, and he will be, forever”, she wrote. “To our Jack – I’m so sorry that the first few moments of your life were met with so many complications, that we couldn’t give you the home you needed to survive. We will always love you”.

After the hospital, “Driving home from the hospital with no baby”, Chrissy posted on Twitter. “How can this be real”.

Chrissy Teigen, 34, joined a long list of celebrities who have broken a social taboo in recent years to speak out about pregnancy loss. Others include the former first lady Michelle Obama, the singers Beyoncé and Celine Dion, the actresses Brooke Shields and Kirstie Alley and the actors Hugh Jackman and James Van Der Beek.

Such disclosures have resonated with women across the United States, where pregnancy discrimination is widespread, and organizations that provide family-planning or abortion services are often targeted by conservative officials, and miscarriages are still largely spoken of in hushed tones.