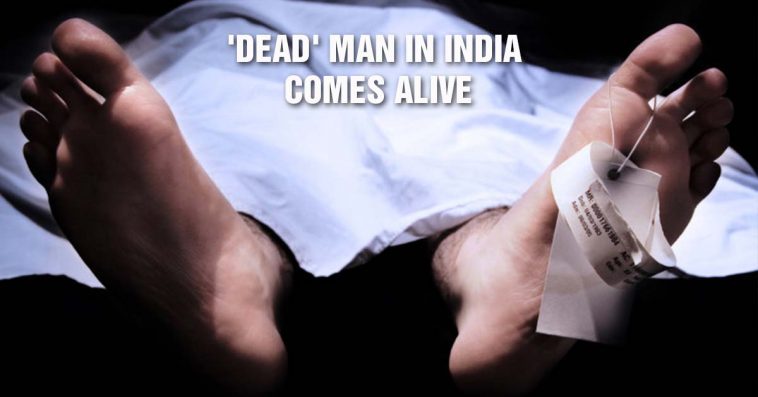 Shookt! A man who was believed to be dead by health person, came alive moments before autopsy.

On Wednesday, March 3, A health official said, An Indian man severely injured in a motorcycle crash was found moving on an autopsy table just before doctors prepared to open him up.

Shankar Shanmukh Gombi, 27, suffered serious head injuries from a motorcycle crash last weekend in Mahalingapur, India, and was admitted to a private hospital in Belgavi.

Doctors told his family his chance of survival was rare and would not survive if he was taken off a ventilator and suggested they take him home.

The relatives then brought him to Mahalingpur government hospital, where doctors declared him dead and announced to friends and family that he had passed.

Dr. SS Galgali said he was called in by Mr. Gombi’s relatives to perform the postmortem but when he arrived at the hospital the body hadn’t arrived yet, so he called the family.

“When I called the family and asked if Shankar was breathing, they said that they didn’t know, and were using the Ambu Bag (Bag Valve Mask used for artificial respiration) to help him breathe,” Dr. Galgali said.

He explained that a large crowd “of nearly 2000” gathered around the ambulance as it arrived carrying Mr. Gombi and wouldn’t allow him near.

The doctor claimed staff was unable to check Mr. Gombi and the crowd carried Mr. Gombi to the morgue.

“The doctor on duty couldn’t even check Shankar properly and the pulse oximeter indicated nothing. Seeing this, the uncontrollable mob took him to the postmortem room,” he explained.

It was then Dr. Galgali asked for the Ambu Bag to be removed and he began to breathe without help.

“After a while, he started to breathe on his own and started shaking his hands when I tapped it,” Dr. Galgali said.

“However, a senior officer in the postmortem room who was prepping for the procedure said that he observed movements. On closer examination, he found that he was alive,” a family member was quoted as saying reported in the Times Of India.

Dr. Galagail told the outlet he was informed Mr. Gombi was dead “as per the request of his family.”

A government health officer confirmed the incident to AFP, according to outlet Latestly.

The official also reported doctors at the private hospital had exercised “bad judgment” and Mr. Gobi is now receiving treatment in another hospital where his condition is improving.