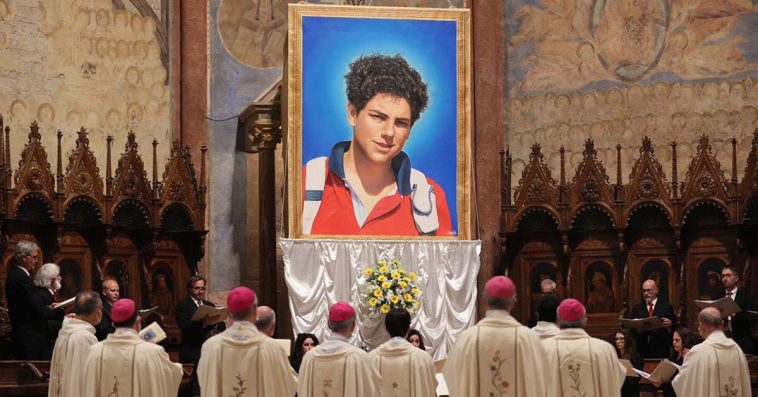 The Catholic Church now has it’s first “Blessed” who loved Super Mario and Pokémon, but not as much as he loved the Real Presence of Jesus in the Eucharist.

“To be always united with Jesus, this is my life program”, The blessed wrote at the age of seven.

On Saturday, Oct 10, A British-born Italian teenager who dedicated his short life to spreading the faith online and helping the poor was beatified by the Catholic Church.

A member of the millennial generation and an Internet and computer-mad youngster Carlo Acutis, was only 15 years old when he was diagnosed with one of the worst types of leukemia – Acute Myeloid Leukemia (AML or M3) and died in a hospital in Monza, Italy, in 2006, offering all his sufferings for the Church and for the Pope.

He was placed on the path to sainthood after the Vatican ruled he had miraculously saved another boy’s life.

The beautification leaves him just one miracle away from becoming the world’s first millennial saint.

The Vatican claims he interceded from heaven in 2013 to cure a Brazilian boy suffering from a rare pancreatic disease.

The beatification ceremony took place in a Mass at the Basilica of St. Francis of Assisi., the home of his idol Saint Francis, who dedicated his life to the poor.

He was a normal, handsome and popular boy. A natural jokester who enjoyed making his classmates and teachers laugh.

Carlo’s motto reflects the life of a normal teenager who strived to be the best version of himself, living the ordinary in an extraordinary way. He used his first savings to buy a sleeping bag for a homeless man he often saw on the way to Mass. He could have bought himself another video game for his game console collection. He loved to play video games. Instead, he chose to be generous.

This was not an isolated instance. His funeral was packed with many of the city’s poor residents that Carlo had helped, demonstrating that the generosity he had extended to the homeless man on his way to Mass had been offered to many other people as well.

Carlo, dubbed “the cyberapostle of the Eucharist”, was born in London to Italian parents, and moved to Milan with them as a young boy.

“He was considered a computer genius… But what did he do? He didn’t use these media to chat, have fun”, his mother Antonia Salzano said in an interview with Vatican News.

Instead, “his zeal for the Lord” drove him to make a website on miracles, she said.

The millennial cyberapostle, whose body lies in state in Assisi, dressed in a tracksuit and trainers, also warned his contemporaries that the internet could be a curse as well as a blessing.

Pope Francis referred to him last year, in a warning to youngsters that social networks could foment hate.

“(Acutis) saw that many young people, wanting to be different, really end up being like everyone else, running after whatever the powerful set before them with the mechanisms of consumerism and distraction”, Francis said.

As a result, Carlo said, “everyone is born as an original, but many people end up dying as photocopies’. Don’t let that happen to you!” he said.