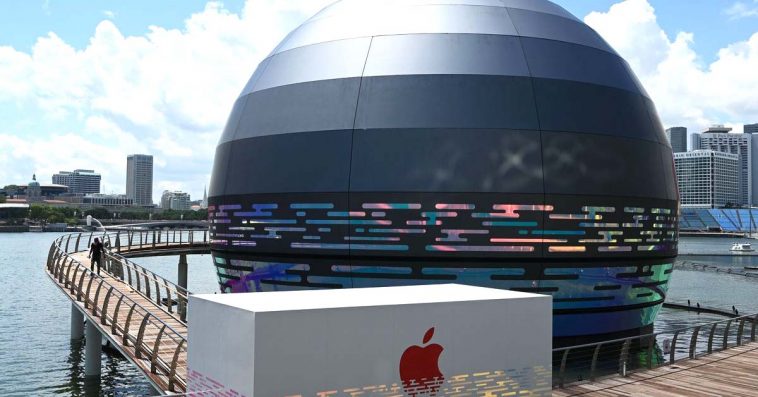 Shookt! Apple store that sits on the water?, Yas! you heard it right. It’s not an interactive science center, nor a science museum. But it’s the first-ever coolest Apple store in the world that is built on water.

Previously, the location of the dome-like structure was for five years a mega nightclub formerly called Avalon from 2011 to 2016 which took up a massive 17,000 sq ft area. It has been revamped with colorful lights, an Apple logo, and finally, it has been reborn as an Apple store.

Apple stores are seen everywhere around the world, sometimes on the streets, most of the time in malls. But nothing quite like this one that’s about to open in Singapore. The latest addition to the city-state’s futuristic skyline is a floating orb that looks straight out of a sci-fi movie.

It’s located at the luxury resort Marina Bay Sands and is the first Apple store that sits on the water. It will be named Apple Marina Bay Sands after the hotel complex it will be part of, while there isn’t an official announcement for the opening date.

Apple Marina Bay Sands has a unique dome-like and Sphere-shaped design, unlike any other Apple store. It’s also known as the “Floating orb” because it was built on water that seems like the structure is floating. It’s also called the “Lantern on the Bay” because it glows at night.

This is the third Apple Store in the country. Apart from the Marina Bay Sands, Apple has two Apple stores in Lion City, located at Knightsbridge Mall in Orchard Road and the Jewel Changi Airport.

According to Straits Times, an Apple spokesperson confirmed the news, saying, “Apple Marina Bay Sands is coming soon to Singapore, celebrating the first Apple store in the world that sits on the water.”

“As with every Apple store around the world, Apple Marina Bay Sands will bring the best of Apple to our customers, at an iconic location in Singapore. We can’t wait to see you soon,” it continued.

Apple also said on its site that “Apple Marina Bay Sands will be at the heart of creativity, a place we’ve made for you to capture your ideas and passions. It will be a space for you to explore, connect, and create something new.”