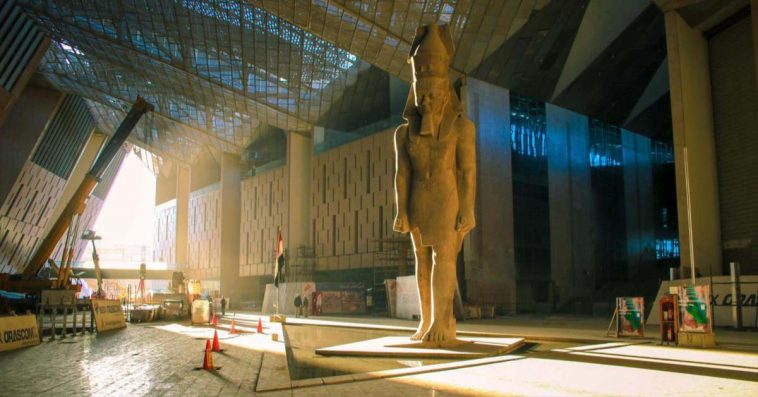 It’s been a while since news first broke on Egypt’s much anticipated new antiquities museum: the Grand Egyptian Museum (GEM), which will be the largest archeological museum in the world.

The GEM was first announced in 1992, partially to deal with what was considered a pretty unsatisfying selection of institutions showcasing Egypt’s inheritance. The location was chosen to get around the issues of moving visitors through central Cairo’s infamous traffic, but Irish architects Heneghan Peng have also addressed visitor overcrowding, poor acoustics, and, crucially, conservation threats. There will be more than enough space, as Eltayeb Abbas, the new museum’s head of archaeology, put it, “for us to welcome the world and show them the best of our ancient civilization.

The news comes via The Art Newspaper: The Grand Egyptian Museum will finally be finished by the end of this year. So promises Major General Atef Moftah, who in 2016 was personally appointed by President Abdel Fattah Al-Sisi to lead one of the most prestigious—and delayed—museum building projects of the 21st century. The museum was originally scheduled to open in 2011.

In a behind-the-scenes tour of the construction site on the Giza plateau, Moftah estimates that the building is now “96.5%” complete. Then it will take “four to six months” in 2021 to install some 100,000 artefacts, including 3,000 treasures from the tomb of Tutankhamun.

In April, the president pushed back the opening date of the museum from late 2020 to 2021. Moftah will not be drawn on the new timetable because of “Covid 19-developments”. World leaders will also need reasonable notice to attend, for as the general puts it, “Egypt’s gift to the world deserves a huge celebration”.

A trained engineer, Moftah is proud of his own contribution to the building: the main façade, a long freestanding wall. “This is my personal design,” he says. “I saved more than $180m from the budget. The previous design was very complicated and would’ve taken a lot of time.”

The Dublin-based architects Heneghan Peng, who won the competition to design the museum back in 2003, had planned a 1km-long wall using translucent onyx to be back-lit at night. Their triangular wall motif—chosen for stability rather than in homage to the neighbouring ancient Pyramids—remains the same. But Moftah’s modified wall has been achieved in glass and appears to be about half the length.

The Grand Egyptian Museum is unquestionably grand. At 490,000 sq. m, it is the size of a major airport terminal. Egypt’s minister of antiquities and tourism, Khaled al-Anany, calls it the “Fourth Pyramid”, and naturally, it comes with a panoramic view of the ancient monuments.

Even with distractions—construction noise, scaffolding, and men in blue boiler suits liberally spraying disinfectant—the atrium is breathtaking. “You could park a 747” inside, says architect Roisin Heneghan, who describes the museum’s exhibition space as “the size of four football fields”.

The largest artefact—an 11m-high, 83-ton red granite statue of Ramses the Great—arrived early, in January 2018, so the atrium could be built around it. On the grand staircase behind Ramses stand 87 statues of pharaohs and Egyptian gods, most still under protective wraps. Once unveiled, they will offer tourists a potted history of Ancient Egypt as they ascend.

The museum recently announced that the ticket price for foreigners will be 400 EGP, around $25, with a 50 percent discount for students.

September to April are the prime months for touring in Egypt, with Christmas and Easter as the busiest periods. All tour groups are expected to visit the GEM, so it is unlikely to ever be empty—although visiting later in the day may be easier. Some of the restaurants are expected to be open 24 hours a day.

Unlike the old antiquities museum, the GEM is well-placed for access. It’s close to the Cairo ring road, the freeway circling Cairo’s metropolitan area. It will be connected to the Cairo metro when the new line is completed and, conveniently, can be reached by air: the new Sphinx International Airport, 20 minutes away, will receive international flights, but the main advantage will be the domestic routes, making it an easy day trip from the Red Sea resorts.

Alongside the galleries, there will be eight restaurants, 28 gift shops and a 3D cinema.