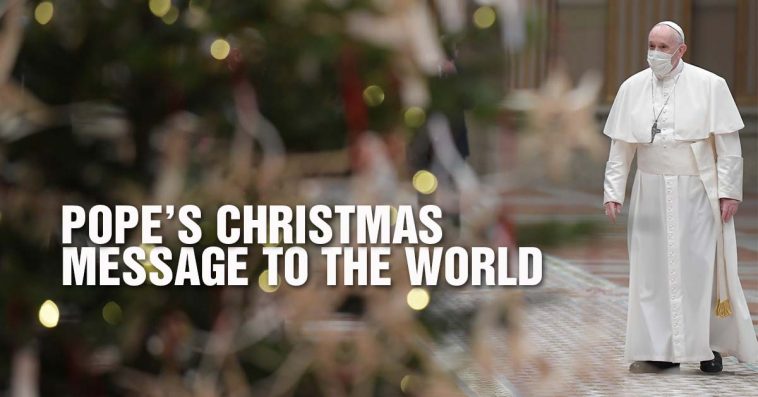 The Pope calls on leaders of countries and businesses to ‘promote cooperation and not competition’ in attaining vaccines for the world’s people.

On Friday, December 25, Pope Francis in his Christmas message, called for “vaccines for all, especially the most vulnerable and most in need in all regions of the planet” for the coronavirus, which he said had exacerbated existing global crises.

“Today, in this time of darkness and uncertainty regarding the pandemic, various lights of hope appear, such as the discovery of vaccines,” Francis said. “But for these lights to illuminate and bring hope to all, they need to be available to all.”

The pope traditionally delivers his Christmas message and blessing from the outdoor central balcony of St. Peter’s Basilica, addressing thousands squeezed into the piazza below. This year, due to COVID-19 restrictions, that ceremony was moved to the Apostolic Palace, the official residence of the reigning pontiff, before a much smaller group.

The pope used the occasion to highlight the need for countries to help each other “in the face of a challenge that knows no borders.”

“We cannot allow the various forms of nationalism closed in on themselves to prevent us from living as the truly human family that we are,” Francis said. “Nor can we allow the virus of radical individualism to get the better of us and make us indifferent to the suffering of other brothers and sisters.”

Traditionally the most important papal message, delivered on Easter and Christmas and known as the “Urbi et Orbi” (“to the City [of Rome]and to the World”), usually encourages countries to consider the challenges faced by the most vulnerable. This year, that message was particularly urgent, as thousands succumb to COVID-19 every day.

Vaccines were “glimmers of hope in this period of darkness and uncertainty,” Francis said in the annual “Urbi et Orbi” speech.

“I call on everyone, on leaders of states, on businesses, on international organisations, to promote cooperation and not competition, to find a solution for everyone: vaccines for all, especially the most vulnerable and most in need in all regions of the planet.”

The pandemic had come at a “moment in history, marked by the ecological crisis and grave economic and social imbalances,” the pope added, saying that made it “all the more important for us to acknowledge one another as brothers and sisters.”

And “on this day… let us turn our gaze to the many, all too many, children worldwide, especially in Syria, Iraq and Yemen, who still pay the high price of war,” he added.

Pope Francis will make a historic visit to Iraq in March, the Vatican said Monday, the first ever by a pontiff and which will include a trip to the city of Mosul, a former jihadist stronghold.

The pope has long spoken of his desire to visit the Middle Eastern country, where two decades of conflict have taken a heavy toll on Christian communities.