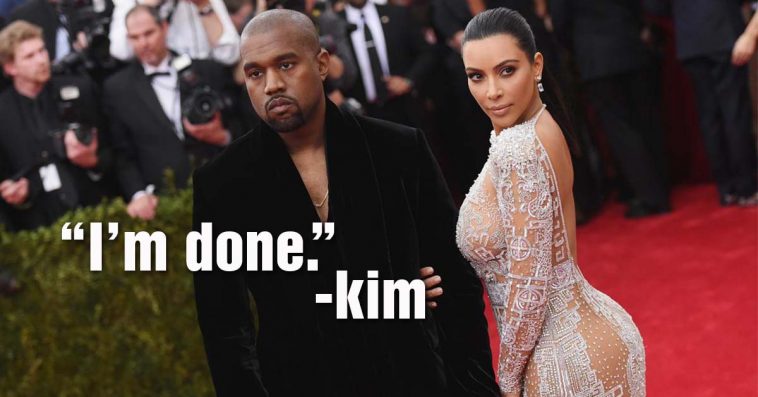 Shookt!!! ‘This time it is way, way more serious’ said Kim & Kanye in a statement, are they really getting a divorce?

Reality TV star Kim Kardashian and rapper Kanye West are reportedly considering divorce after 6 years of marriage, as they figure out their future plans for the family.

“They are keeping it low-key but they are done,” says a source. Kim is “in settlement talks” with powerful celebrity divorce attorney Laura Wasser. Wasser is the same attorney who represented Kardashian during her divorce from Kris Humphries in 2011, and also Angelina Jolie, Heidi Klum, Britney Spears, and Johnny Depp’s attorney.

Though this isn’t the first time they thought about splitting up, “but this time it is way, way more serious,” says a source to Page Six. They said it’s happening now “because Kim has grown up a lot.”

Kim, 40, hasn’t been seen wearing her wedding ring, and Kanye, 43, remained at his $14 million Wyoming ranch over the holidays instead of spending it with the Kardashian family, who drew criticism for their extravagant celebrations.

“Kim got Kanye to go up there [Wyoming] so they could live separate lives and quietly get things sorted out to separate and divorce. She’s done,” the source continued.

The source added that while Kim has done much in the past to protect and help Kanye deal with his mental health struggles, now this divorce is happening because Kim has grown up a lot.

A separate source says Kanye, who became increasingly uncomfortable and irritated by the Kardashians’ over-the-top reality star lives, “Is completely over the entire family … He wants nothing to do with them,” adding he eventually found their reality show “unbearable.”

It can be recalled that the couple has been on the news several times last year for their marriage. Rumors about divorce have been brewing since last year, but they have been attending marriage counseling and have been working on fixing their relationship.

TMZ reports that “the marriage was in deep trouble for the last half of 2020.” There was also a point where Kardashian was ready to file for divorce, but when Kanye was struggling with his mental health, “she felt it was cruel to do it when he wasn’t well.”

The couple also hasn’t been living together for a couple of months and only see “each other for the sake of the kids but have been living separately. Kim knows the marriage is over. She’s known for a while,” a source told E! News.

Despite their marriage struggles, lifestyle indifferences, and unaligned political beliefs, Kardashian hasn’t filed for anything and no final decision has been made yet. A source told E! News that “She wants to make sure she’s making the right decision for the kids.”

“It’s not about the marriage anymore, she’ll always care for Kanye but it’s over between them. Kim is only focused on what’s best for the kids. It’s a tough decision for her and she’s figuring it out,” they added.

It was also noted that Kardashian wants to move forward and is thinking about her own mental health, too. “She is serious about taking the bar exam and becoming a lawyer, she is serious about her prison reform campaign. Meanwhile, Kanye is talking about running for president and saying other crazy s–t, and she’s just had enough of it,” said Page Six.