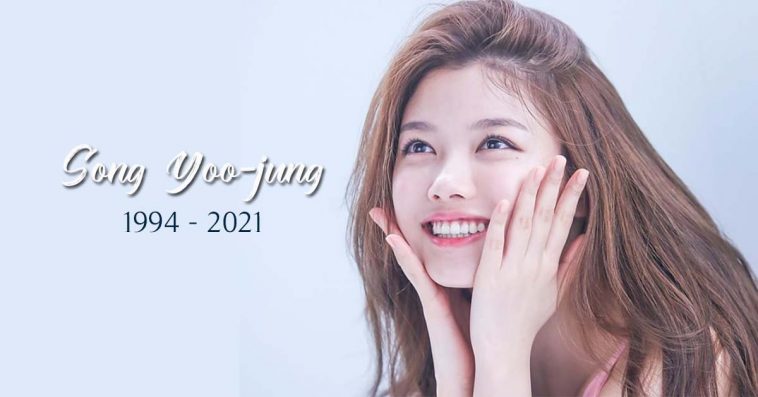 Shookt! another South Korean celebrity has left us, she’s too young to die, but gone too soon…

On Monday, Jan. 25, South Korean actress Song Yoo-jung has died at the age of 26, her agency confirmed.

According to Soompi.com, Song’s agency Sublime Artist Agency shared a statement about her passing:

“Actress Song Yoo-jung departed this life on 23 January 23, 2021. In accordance with the wishes of her family, the funeral was held quietly, and the funeral procession takes place on 25 January at 1:30 pm KST. Song Yoo-jung was a friend of ours who always gave us joy with her bright smile, and she was a wonderful actress who acted with heated passion. Please pray for the repose of her soul so that she may rest in peace in a warm place.”

The agency did not confirm reports about the cause of her death.

Song made her debut in 2013 as a model for cosmetics company Estée Lauder.

The same year, Song began her acting career in TV series “Golden Rainbow.” She also had supporting roles in two more shows such as Make Your Wish (2014) and School 2017 (2017).

Her final role came in 2019, when she played the main character in romantic fantasy drama “Dear My Name.”

The late actress had signed with Sublime Artist Agency in 2019, which also represents Parasite actor Song Kang-ho and singer Rain.

South Korea has seen a spate of deaths among its young celebrities in recent years.

n December 2017, K-pop superstar Kim Jong-hyun, better known as Jonghyun, took his own life at the age of 27.