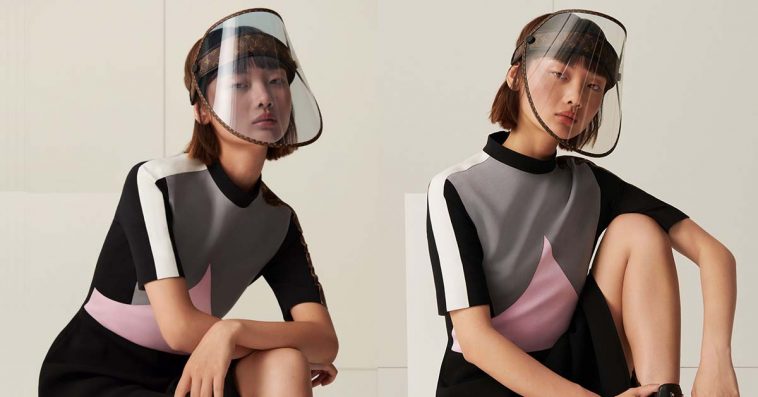 Faceshields has gone full bougie — cause, soon, you’ll be able to fight COVID-19 and look fly doing it at the same time… for a pretty penny, of course.

In April, at the beginning of the COVID-19 pandemic, designer brands like Louis Vuitton, Gucci, Armani, Bulgari, and Prada joined the global effort to make personal protective equipment to support health care workers on the front lines of the pandemic. Louis Vuitton said it had repurposed its workshops in France to “produce hundreds of thousands of non-surgical face masks for health care workers”. The brand also said it was donating thousands of hospital gowns to six Paris hospitals in urgent need of protective gear.

Its parent company, LVMH, also announced that its factories which typically make perfumes and cosmetics would be used to make alcohol-based sanitizers, given free of charge to French healthcare workers.

Louis Vuitton announced this week that it will be releasing its own high-fashion face shields as part of the new item to their 2021 Cruise Collection. The face shield will be out online and at select Louis Vuitton stores starting on October 30, while pricing has not yet been announced.

The face shield consists of two parts: the transparent visor to protect your face and an adjustable headband to keep it snug. The head strap of the shield is covered in LV’s signature monogram-coated print, as is the padded headband. The transparent visor is attached to the temples of the headband by two gold studs engraved with the LV’s logo and can be flipped up or down depending on the situation. The visor should help protect your face from particles and liquids, it will also protect you from UV rays as it transitions from clear to dark when exposed to direct sunlight.

In a statement, LV hyped the shield as “an eye-catching headpiece, both stylish and protective”.

The Centers for Disease Control and Prevention is careful to point out that when it comes to a face shield, “effectiveness is unknown at this time,” although Dr. Anthony Fauci suggested stocking up on the face barriers back in July.

LV isn’t the first luxury fashion brand to dabble in COVID wear, both Burberry and Salvatore Ferragamo have released (and sold out) their own versions of the face mask.