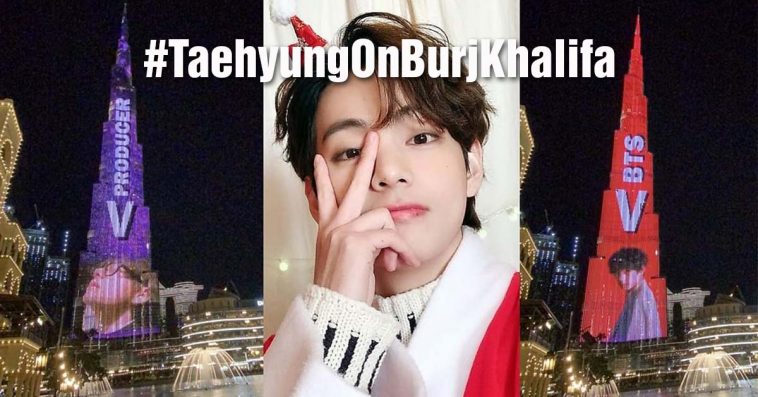 Shookt!!! V you are really conquering the world as you became the first Korean Idol to have a birthday ad on Burj Khalifa.

On Wednesday, Dec. 30, BTS’ V turned 25 at the stroke of midnight KST, which called for a lit celebration organized by fans across social media — and even at the tallest building in the world.

Global pop stars BTS are ending the year on a high note with their upcoming 2021 New Year’s Eve Live concert. Ahead of the grand celebration at the family concert on December 31, singer-songwriter-composer V is celebrating his 25th birthday (26th in the Korean age system) today. Born on December 30, 1995, V, real name Kim Taehyung is ringing in the new year on a high note thanks to the fans’ love and support.

Featured on the Burj Khalifa, China V Bar, V’s Fanclub based in China, organized the birthday ad with a three-minute sound and light show which was accompanied by V’s original track ‘Winter Bear’. This was followed by a dancing light show choreographed and customized to the self-composed song. He becomes the first Korean pop star to have his birthday ad on the tallest building in the world.

V becomes the second celebrity in the world to have his birthday ad after Bollywood superstar Shah Rukh Khan who celebrated his birthday last month in Dubai and a grand birthday ad on the building.

A few days ago, V drop his original track ‘Snow Flower’ which features his friend and artist Peakboy. In a special message, V talked about why he chose to release this song during Christmas. “I believe that there would be a personal uneasiness and gloominess that would befall many of us as the end of year approaches due to the feeling of stopped time. I hurriedly made this in an apologetic heart to ARMY, as I continued to fall behind on my mixtape,” he wrote in his message.

“I believe that this year would feel like one of stopped time, and as the end of year approaches, there would be uneasiness and gloominess that would befall many of us. It would be good if, at least on this day, white flowers would fall into your hearts so you could feel a warm consolation and joy. I really want to thank the many white angels of this year hehe Thank you. And my Wooga friend Peakboy featured in this. Happy holiday!” he concluded (via doyoubangtan). The song released on December 25, Christmas Day.

Meanwhile, on the work front, BTS released their studio album ‘BE’ on November 20, 2020. The lead track ‘Life Goes On’ went No. 1 on Billboard Hot 100. This month, members Jin, Jimin, and V released original tracks for the fans – ‘Abyss‘, ‘Christmas Love’ and ‘Snow Flower’ ft. Peakboy.